Phones have become a need. And Tesla is related to phones in only one way; it fulfills people’s needs making cars. If only it stopped right there.

Tesla was in the making of a humanoid robot. Yes, they did! and are still improving it.

Now, keep on guessing. What else?

Tesla; is it going to release its own phone? Yes, a Pi Phone, to be precise with the assumptions. Musk and the team haven’t openly stated that. But sources exist, and are strong.

Tesla started in 2003 after General Motors recalled all of its EV1 electric cars. The opportunity they saw was the higher fuel efficiency of battery-electric cars. Released the first car, the Electric Roadster, in 2008. Then came solar roofs, trucks, homes, and even a humanoid robot.

But we DO NOT know Tesla for going out of its range bubble. You see, even Tesla’s humanoid robot uses Tesla car’s parts and functions to operate.

So, within the range of what Tesla already offers, what can we really expect from Tesla Phone?

The Tesla Pi Phone could have 120 Hz refresh rate. A normal 6.7-inch OLED display, 1600 nits peak brightness, and a pixel density of 458 PPI. The phone might sport an octa-core processor. It is said to have a triple camera setup on the rear with a 50MP primary sensor, a 50MP ultra-wide sensor, and a 50MP telephoto lens. For selfies, there is said to be a 40MP front camera. Apart from that, some common stuff including 5000mAh battery, fast charging support, and 8GB RAM with 512GB internal storage variants are also expected.

As for the specialties, Tesla’s Pi Phone is expected to bring features to a smartphone we’ve never seen before. These include the ability to control Tesla cars with better integration than Android or iOS apps, hardware that would enable crypto mining, solar charging, satellite internet, and astrophotography. While these features could come to the Tesla Pi Phone, there is no official information. These are speculations and expectations of the community.

Automation is different from automatic. Automation is the process of making a machine or system operate automatically. Something that is automatic requires no human input to operate.

Tesla’s phone will come with a lot of automation. For example, the phone will automatically open apps you usually open during a given time of the day.

Not only that, it may alert you of an appointment you have, without you even having to open the calendar app.

Just like Tesla cars read other vehicles on the road to adjust speed and direction, the phone will be able to read and react to your surroundings and schedule.

Furthermore, rumors even say that Tesla’s Pi phone will be able to make its own decisions. If you’re running late for a meeting, it will automatically order an Uber for you.

The phone will also be able to do the same with other Tesla gadgets around it, to make your life easier.

All these features, and many more, make the Tesla phone a must-have for anyone who wants a taste of the future.

The standard version of the phone could cost $900, and the Pro version, $1,200. The phone will be available in black and white. If we believe the rumors, Tesla Pi Phone could be released as soon as December this year.

Technically, it does not make sense for Tesla to release a phone in 2022. For one thing, they haven’t given us a tiny clue for long. Especially during ongoing economic instabilities like this, a phone would not be a priority of release for the company. The logical assumptions of the phone’s release date lie anywhere between Q2 and Q4 2023. However, CEO Elon Musk is known for his ambitious plans amid his desire to change the world.

Some sources even state that Tesla phone will have “superior artificial intelligence” and will be able to run for weeks on a single charge. That makes a lot of sense. If Tesla is indeed entering the smartphone market, they must have had a revolutionary phone in mind. The release date and price of the phone have not been confirmed by Tesla themselves.

This theory has been put forward by certain people who have dug deep into the patents that Tesla has filed in the past.

There are factors that help us assume how Tesla’s phone will look like:

First, we know that Tesla is all about automation. Their cars are some of the most advanced on the road, and they’re only getting better. It’s not a stretch to think that they’ll apply that same level of automation to their phones.

Tesla has shown a recent interest in humanoid robots. It’s also possible that they could similar tech to create a virtual assistant for their phones, or a robotic physical design for the phone.

Musk owns neuralink, a neurotechnology company. This could mean that the Tesla Phone will have some sort of neural interface. This would allow you to control the phone with your thoughts or movements, at least to an extent.

Tesla Pi Phone will be a highly automated phone with an advanced virtual assistant and a neural interface. It will be the most advanced phone on the market, and it will be unlike anything we’ve ever seen before. More likely than not, if Tesla does release a phone, they will release a gamechanger. 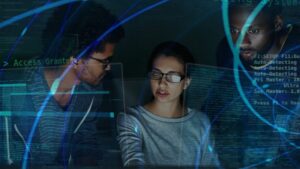 Previous post Things That Can and Can’t be Tracked

Next post Best Websites with Wallpapers for Ultrawide Monitors