We can find examples of robots in a wide range of settings, and it’s not compulsory for robots to have AI. This article is all about examples of robots with Artificial Intelligence. However, before that, we need to understand the key difference between a robot and an AI, a physical robot and a digital one.

So, not all robots come up with AI. There are two common types of robots:

1. Digital bots – Digital bots are those you face in games, chatbots, and virtual assistants. They use algorithms and AI to do their work.

2. Physical Robots – Physical robots are the ones you see in factories and warehouses. They have a very minimal amount of programming installed and are very specific with the task.

And the biggest field is robots with artificial intelligence, capable of learning and improving their physical performance. For example, a robot with AI interacts with its environment, makes decisions, and can even take corrective action. This helps them complete tasks that require creativity and problem-solving. For example, in search and rescue missions, robots with AI play a key role in finding survivors. Technical specialties like robotics engineering, AI, and computer vision are necessary to build robots with AI.

The main reason behind building such robots is to cover up a broad range of applications. Even in a single industry like food, rather than repeating a specific task, robots with AI can not only pick and place objects but also learn to identify and sort food ingredients. AI alone could only let us learn complex patterns and stats about food. On the other hand, a robot alone could only handle simple, repetitive tasks. Here are some examples of robots with Artificial Intelligence:

How can we not talk about Ameca when we are talking about robots possessing AI? She can push up, do a handstand, walk on her hands, and even do a headstand! One Ameca costs over $133,000. Following the 15-year hard work of Engineered Arts, the robot has grey-colored skin, with deliberate gender and race-neutral characteristics. Ameca attracts people towards her due to her smooth movements, especially with her almost-perfect human facial expression imitations. Also, while performing push-ups and pullups, the body movements are out of this world. Ameca is currently the best example of an AI-powered robot when it comes to a physical imitation of humans.

Atlas is a humanoid robot, Boston Dynamics originally created for search and rescue missions in disaster areas. It was also able to open doors, carry heavy objects, climb ladders etcetera – all on its own. Furthermore, Atlas was also able to walk across slippery and uneven surfaces without losing balance – something that even humans find difficult to do! Like this:

In this 2021 video clip above, however, you can see Atlas performing unreal backflips. And let me remind you that this is a physical robot, not an NPC. For your information, a physical robot performing such complex advanced movements is not possible without AI. First, such a robot needs a body and a set of sensors. Then, an AI model is trained to understand the robot’s environment and the robot’s actions. Finally, the AI model receives commands from a human (or other AI) and controls the robot accordingly. The Atlas robot you see above; even though it has AI, it is one of the smoothest, most realistic humanoid robot movements ever seen.

Autonomous cars are AI-powered cars that can drive themselves without any human input. Although this may not be the example you were looking for, theoretically, autonomous cars are robots with Artificial intelligence. Some examples of AI used in autonomous vehicles are Autox’s 4D Lidar and Waymo’s “Sense, Solve, Go”. Waymo’s AI process, “Sense, Solve, Go”, has driven over 20 million autonomous miles. We don’t need to explain too much, as this technology is already a norm. But still, whether or not to consider a car as a robot is a debatable topic.

The Mars rover Perseverance uses an AI-powered device called the Planetary Instrument for X-ray Lithochemistry, or PIXL. The device uses AI to obtain information about the environment and is able to search for clues to help in the mission. The use of PIXL requires determination and strength of will, both of which are qualities of perseverance. If AI was not there, the mission would have been much more difficult for the robot. For one thing, it would have taken longer to sort through the data and find the answers. Even more importantly, Perseverance would have been unable to make decisions about where to explore and what to look for. The way AI is helping space robots is a testament to the ambition and dedication of the mission’s team. In fact, NASA has asked several times for the public’s help to train AI for its rovers.

Robosen Interstellar Scout K1 Pro is a revolutionary robot with its cutting-edge technology and artificial intelligence. Weighing only 0.94 kg, it has 17 high-precision servomotors, 18 microchips, a built-in microphone, voice commands, Bluetooth connection, a built-in speaker, and a rechargeable lithium-ion battery. K1 Pro’s adaptive control algorithms simulate a human-like gait and allow for high-dimensional movements. It can be programmed with four different modes and responds to voice commands. The minimalist design is made of aerospace-grade materials and is controlled via 64-bit Android or iOS devices. It is a great gift to bring next-gen family entertainment. The role of Artificial Intelligence in the K1 Pro Robot is to give it the ability to understand and respond to voice commands, to move with precision, and to be able to perform stunts and other movements. You can buy it for $400.

Miko 3 is ideal for kids who want to explore, play, and learn. It’s packed with deep-learning AI, educational STEAM content, and interactive games. Kids can enjoy new jokes, stories, and songs every month. With HD camera and sensors, Miko brings a full-on dance party. Plus, kids will be rewarded for progress with Miko Journeys. This $200 robot is an awesome AI-infused friend. You may be thinking that the level of programming this robot has isn’t enough to be called AI. But it can engage in two-way communication with people, using a natural language interface to ask and answer questions, as well as process human emotions. This is more than a gimmick.

Examples of machines that are not robots with AI

To better understand robots with AI, now we will also need to mention those without AI. Industrial robots, such as KUKA KR210, are used in factories without AI. They are programmed to carry out specific actions such as welding and assembly. Flying robots do not possess AI; drones cannot think for themselves. These robots possess a minimal form of programming that we can not consider as intelligence. AI requires sophisticated programming. Here are some examples of AI or robots that are not both:

Dexarm Maker is a physical robot because it is programmed to move in a certain sequence, helping it move and perform a task similar to humans. It does not have its own intelligence. So, we can not consider it a robot with AI. The key point of identifying whether a machine has intelligence or not is its ability to learn, solve problems, and respond appropriately. This robot, for example, can sense, and act, but can not plan and act accordingly. According to the company website, it is suitable for 3-d printing, laser engraving, and cutting. Now, its 3.5-inch touchscreen does allow you to check the status and command Rotrics within your hand. But does this robot have Artificial Intelligence? No, it is nothing more than a physical robot with little programming. The amount of programming this robot possesses, can not be considered as AI.

NPCs – Bots; little to no intelligence, no physical existence

While most NPCs (non-player characters) in video games are not that intelligent, some still stand out and are good examples of digital artificial intelligence. For example, the AI bot in The Sims could get a job, go to work, socialize with other NPCs, and even fall in love. And as the game progressed, the AI got better at simulating human behavior. Another example is Ellie from The Last of Us Part II who is an AI-powered NPC. Throughout the game, she shows human emotions such as anger, sadness, love etcetera. She also makes decisions on her own (such as whether to kill an enemy or spare their life). But these bots are not physical enough to be called a robot. So, despite possessing AI, these NPCs are not robots. Hence, we can not consider them in the list of examples of robots with Artificial Intelligence.

Equbot is an AI-powered stock market trading bot, that is integrated with IBM Watson to predict stock prices. Apart from historical market patterns, it also performs random analyses of news articles from all across the globe. The bot does this by analyzing data such as news, SEC filings, and social media. Its algorithm can automatically read and understand unstructured data (such as articles, blogs, etc). For instance, if news about the Consumer Price Index comes up, it will analyze that data based on technical market indicators and make predictions about future stock prices. It would have required a lot of human involvement, but the AI does that instantly, and passively. But despite being more capable than humans in predicting the market, this bot is not physical, hence not a robot. So, this bot does fit into the definition of a robot with AI.

Tech enthusiasts often get confused between different fields of AI and robotics, so we thought this article was a necessity. Apart from giving a variety of examples of robots with AI, we also discussed what we can’t consider AI. The main aim of all those examples was to clarify the difference between these two fields. Devices without AI are still valuable in a lot of ways. However, one clear thing is that emerging fields of AI, such as NLP, are transforming the robotics industry. With increasing AI capabilities, robots are performing more complex tasks and movements. Our responsibility is not limited to understanding, but also to use this technology responsibly. 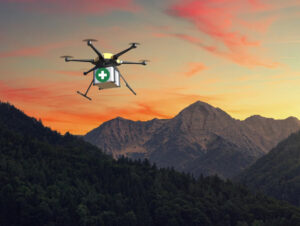