We are getting closer and closer to achieving a “true” robotic arm for humans.

We have already developed a robot hand with abilities similar to human hands. Without any doubt, creating robot hands with the dexterity, strength, and flexibility of human hands is a big challenge.

But what’s more challenging is to create a futuristic robotic arm that can be controlled by our minds. The whole purpose of creating a robotic arm is to feel like our normal hands + the obvious special abilities.

The cost seems to be a big factor at the present. Today, an industrial robotic arm can cost anywhere from $25,000 to $400,000. So leave alone a robotic arm controllable with your mind. But we are talking about the future. So the cost will not be an issue at all.

The futuristic robotic arms will be something different.

It could be directly operated by your brain, respond to any mental command you give it, and instantly perform a range of actions. It will move exactly the same way your normal hand would move.

The new types of robotic arms will be a mix of physical robotics and brain-like algorithm. So they are very likely to be able to perform a variety of functions and movements that we can control.

With the latest and upcoming technologies such as nanotechnology, the robotic arm will have more advanced features like “super strength” and “super flexibility”. It would be very difficult to create this type of future robotic arm without using something new.

What Does it Take to Build a Robotic Arm?

The robot arm is a term we use to refer to human-like robot arms that can be controlled by human minds. The basic functions of the robotic arm are similar to human hands, but the way it controls objects and carries out movements are very different from humans.

The kinds of robotic arms we have today (which are similar to our hands) can be used for performing most tasks that robots can currently do. But what we really need is something similar to human hands but with more advanced features.

It’s obvious that they will be expensive and you will need advanced technologies to build them in the future.

When it comes to materials, here is a possible list of what it would take to build a futuristic robotic arm:

Now, the physical robotic material must be something more than just flexible and strong. The robot arm will most likely be designed to withstand the pressure on its joints.

It’s a lot more than just some plastic or metal tubes and wires. It needs to be able to bend when it needs to and lift heavy weights. If a robot arm can’t do that, then what use is it?

And when it comes to the “neural signals” part, we must remember that there is a lot of information that goes into making the robotic arm work for us. It will take a lot more than just building some wires and sensors.

There are things such as the data from sensors, algorithms, and physics to consider before it can be used for something useful.

There has been a lot of improvement in the overall technology. However, we have yet to see any major leaps in the development of robot arms. For example, the parts that make up the arm are made from different materials, and even if they’re functional, they don’t look anything like real limbs.

The Surprising Uses for a Robotic Arm

It’s impossible to predict how new technology like this will change the world, but if you think of it, there are so many possibilities.

The robotic arms would perform tasks that are currently impossible for human beings. The tasks that don’t even exist now may become a reality in the future. Imagine a world where you can control a robotic arm – or multiple robotic arms – and ask it to carry out whatever you want, no matter how complex the task is.

If a man is standing on top of a skyscraper and has to fix the antenna, he can’t just reach out and pull it down. He must first climb down from the roof, go to the back of the building and then walk to the front again. It’s impossible for him to do most of these things so he must rely on some kind of mechanical assistance, either a crane or a helicopter.

Using robotic arms for this purpose could be an ideal solution because it will make all kinds of tasks more feasible for human beings.

The first robotic arm to make it big will be a robotic pickup arm. We’re pretty excited about that because it’s something that we can actually see achieving in the near future. It will make the manufacturing process quicker, easier, and more efficient.

There are also 4D robotic arms in development that work in conjunction with 3D printers. They are completely autonomous and able to do all kinds of tasks without any human input. They will make 3D printing even more efficient by automatically adding more material when needed.

For now, the uses for robotic arms are limited to surgical procedures and manufacturing operations. In the future, however, we may see them being used for a lot more.

How Robot Arms will revolutionize the world?

We can’t be sure about this, but it’s very likely to happen shortly.

It would make our society more efficient and effective. You can imagine a world where robots are the only people around. Many of the jobs that we see today could be taken over by these mechanical beings.

We don’t know how good these robotic arms will be at performing tasks like operating machines or repairing cars etc. But we are sure they will outperform human beings in many cases.

The availability of a single robotic arm to only one person would mean capitalization at its farthest. On the other hand, if everybody has access to the arm and it has multiple functions, the robot arm would become a very default object.

How robot arms will revolutionize the world is going to depend on the extent of their usability. If it’s able to do tasks that are not possible right now, then of course it is going to change the world.

The tasks such as construction, demolition, and rescue operations can be performed very quickly by a robot arm. It can be used to build a house in just a few days and even faster than that.

But it’s not something world-changing. Even though the robot arm is a very useful tool, it will take time for it to make it big.

Manufacturing sectors will be the first to benefit from these robotic arms because it’s a very complex process and something that is still done manually by people.

It would have a profound impact on various industries such as construction, automotive, and aerospace. But let’s not forget that this futuristic technology is going to revolutionize how we live and work in our daily lives.

It’s hard to say where these robotic arms will be within 10 or 20 years time in the future. It’s because it really all depends on whether or not we can develop them to become something better than our hands. There are many others that I’m sure we haven’t thought of yet, but it’s easy to recognize that we’re not talking about a simple task. It’s going to require a lot of time and research before robotic arms can perform just as well as human beings. 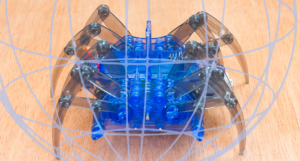 Next post Dawn of creating biohybrid robots in the future: Scientists turn dead spiders into robots