In our previous article, we discussed robot toys from the 70s. As we move forward to the 80s, it’s only natural to expect more sophistication. In the 1980s, as personal computers started to exist, it became commonplace to have personal toy robots too. In fact, we can consider the 80s as the golden era of robot toys. For one thing, they were more affordable and available than ever before. And on top of that, there were no video games to compete for kids’ attention. The decade of the 80s brought a 20x increase in the number of industrial robots compared to the 1970s. This pushed the industry to miniaturize the technology for domestic use, and also to make it more affordable. Here are the most popular robot toys from the 80s:

Features of this 19-inch tall robot include voice activation, a battle axe, a blaster, and a charging cable. it has 2 built-in rechargeable batteries and a travel case. Robosen’s advanced technology brings this classic toy to life with voice-activated actions, mobile app controls, and programmable walking, punching, blasting, and driving. It consists of over 5000 components, 60 microchips, and 27 servo motors, making it a great experience! Yes, still so in 2023.

After transformers, GoBots were the second most popular robot toy in the 80s. The best thing about them was that they were cheaper than transformers and just as fun. Minneapolis company Dimension Creative Art Works designed the toys. They made a total of 72 different GoBots, including Leader-1, Cy-Kill, Vamp, Crasher, and Turbo. The GoBot toys were very simple to use – you just pulled a cord to transform them from robots to vehicles. The plastic they were made of wasn’t very durable, but that didn’t matter because they were still a lot of fun to play with. Although they were popular in the 80s, GoBots fell out of favor in the 90s and eventually went off-air.

In the 1980s, the “Voltron” robot toy line was hugely popular. A plastic, rubber, and metal die-cast figure, Voltron was made by Matchbox and was part of the “Animated Adventures” series. The Voltron toy was an original, licensed reproduction of the popular TV show character. And the toy line; from Lion Force to Defender of the Universe, was special due to its “spacey” storyline. The unique storyline followed five pilots who traveled to different planets to battle evil forces. The heroes faced a different challenge on each planet. Kids loved the idea of these heroes battling evil while controlling a giant robot and replaying it for real in form of toys.

Teddy Ruxpin was an animatronic teddy bear released in 1985 by Worlds of Wonder. He looked and acted like a literal bear. Like he had a wide range of facial expressions; blinking eyes, and a moving mouth. He also had a cassette tape drive which allowed him to read stories and songs. Teddy Ruxpin was widely popular in the 80s and 90s, and yeah, he also had his own cartoon series. He was also one of the first interactive toys 80s kids got to play with. Tedy Ruxpin was a “classic” kid’s toy that had robo features.

Sindy was a popular 80s British robot doll. Her design so much looked like a teenage girl, and she had long blonde hair, blue eyes, and a range of outfits. The doll had electronic accessories, such as a toy telephone that you could talk into and hear Sindy answer-back. She also had an electronic organ that played music when you pressed the keys. Many people currently in their 40s-50s have fond memories of playing with this toy when they were younger.

Star Wars Droids were tiny robots Kenner released in the late 1980s as part of the Star Wars toy line-up. They included R2-D2 (Astromech Droid), C-3PO (Protocol Droid), R5-D4 (Astromech Droid), 8D8 (Maintenance Droid), IG-88 (Assassin Droid), 4-LOM (Bounty Hunter Droid), and more! Each droid came with different features such as spinning antennas or moving arms/legs/head; depending on which droid you bought! Kids loved these droids because they could reenact scenes from their favorite movie (Star Wars, of course) while playing with them!

My Buddy & Kid Sister were two 1985 dolls Hasbro released as part of their Giggles collection. The denim overalls are so cute on them, as you see in the picture above. Kids used to know these two dolls as inseparable. Each doll came with several accessories including books, clothes, shoes, hats, sunglasses, etc. 80s kids loved them because they could dress up their dolls however they wanted! Plus there were several other fun accessories available too such as My Buddy’s fishing pole or Kid Sister’s Barbie car!

Robotix was hugely popular during the 80s due to its versatility – allowing kids not only to have fun building robots but also to take pride in creating something unique that they themselves could control via remote control. Milton Bradley created this toy line based on the animated series of the same name. The series was about a conflict on Skalorr, between Protectons and Terrakors, with humans caught in the middle. The toys were similar to erector sets, with motors, wheels, and pincers that could be used to create robots. Each set had an end goal, and its own name, and could be mixed and matched. Tyraanix Series R-1100, R-1000, and R-2000 were some of the sets released. Robotix was like Legos on steroids and provided hours of fun for kids and adults alike.

Okay, this one was like nothing else. Unlike anything on planet earth, Radio Shack RC Robot used to be in form of something like a balloon. You had to blow it up and then control the toy with a remote control. Just look at the creativity – it literally was a robot. And due to the form it was in, portability was a big plus. I have to say, it’s my favorite one on the list. This robot toy was a success in the early-mid 80s. However, due to popularity from competitors like Robotix & Big Trak, it eventually faded into obscurity. But still, looking at it now, the RC Robot was one of the most innovative toys of its time.

The HERO 1 robot was a hi-tech and advanced robot in the 80s. High-level programming languages like ANDROTEXT made it easy to control and program. The robot was featured in a few episodes of the children’s television program Mr. Wizard’s World. In fact, Byte magazine even called it a “product of extraordinary flexibility and function.” Separable from other robots of its time, HERO 1 had a self-contained computer with a Motorola 6808 CPU and 4 kB of RAM. Yes, 4 kB, and it was a lot back in the 80s! Moreover, the robot also had light, sound, and motion detectors as well as a sonar ranging sensor. An optional arm mechanism and speech synthesizer was also included. If you were a teen in the 80s, this robot was definitely more than a toy and something many dreamt of having.

The KITT car from Knight Rider was one of the most iconic toy cars from the 1980s TV show starring David Hasselhoff as Michael Knight, who drove around in a high-tech black Pontiac Firebird Trans Am called KITT (short for “Knight Industries Two Thousand”). The car featured advanced technology like an artificial intelligence system, talking computer voice, self-driving mode, rocket booster jets, and more! Of course, it also had its own line of toys – including miniature versions of KITT. It became very popular among kids during the 80s (and still remains an iconic robot car for the 80s kids). The knight rider was one of the first cars most 80s kids got to play with, apart from the 70s Big Trak.

Tomy Corporation’s Omnibot 2000 Robot Toy was released in 1984 and was a huge hit throughout the decade. 1980s kids also called it a toy robot from the future, as they could see “2000” written on the front of it. And it indeed did futuristic tasks for that time! Yes, it featured an AI voice recognition system. That system was what allowed users to speak commands into the toy robot’s microphone for it to perform actions. Actions like turning on lights or carrying out simple tasks like cleaning up after dinner parties. It also had sensors that enabled it to react naturally when touched or spoken to. In fact, it could even deliver pre-recorded messages if desired! It’s not hard to see why this robot quickly became one of the most beloved toys from the 1980s. Today there are many variations of this 80s toy robot available online.

Another classic from Tomy Corporation was their Roboforce Robots line, also released in 1984. This robot toy came in two different sizes (large & small). Users used to battle against each other using various weapons such as lasers & missiles! These robots were unique because they could detect when they had been hit by their opponents’ weapons. So, no one ever won until all four robots had been destroyed. They also featured realistic sound effects making them even more enjoyable & exciting when played with friends! Toyfinity, an independent toy company, revived the robot in 2013.

Battle Beasts Action Figures were a popular robot toy line by Japanese company Takara Co, released in 1985. Each figure depicted an anthropomorphic animal armed with various weapons such as swords & guns. This allowed users to customize their teams in every single way they liked. They would light up when placed onto heat-sensitive panels indicating whether it had lost or won against another opponent’s team. For the 80s kids, this robot toy was a great way to pass time with buddies.

Robie Jr robot toy was a hit during the late 80s thanks to its ease of use and durability. And in fact, its interactive features enabled users to record personalized messages using its built microphone. Not only did this come with complete sound effects but also some facial expressions allowing them to become the user’s very own robotic friend. His eyes light up when moving and the bump guard on the front base allows him to turn and say phrases such as “Oops” and “Excuse Me” if he encounters an obstacle. The controller has manual control and a follow function that makes this 11-inch robot follow it. Robie Jr’s durable plastic design ensured he’d last generations. The perfect gift for those wishing to bring back memories and share them with your kids, grandkids, and theirs.

This time too, like the previous article about robot toys, my grannie helped me a lot. The robot toys from the 80s were an important part of many children’s childhoods. Although she was in her 20s when the robot toys were at the peak of their popularity, she can still recall them vividly. In the 70s, most robot toys were just robotic figures that performed pre-programmed actions. But in the 80s, as you see, robot toys had the ability to interact with their environment. That’s certainly a big jump. Thanks for reading. And stay tuned for the next article, which will be about robot toys from the 90s. 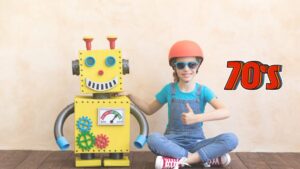 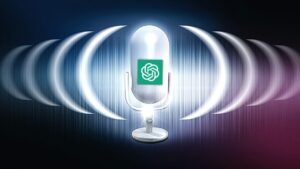 Next post What does it take to create a ChatGPT voice assistant?