Let’s be honest and agree that the present-day VR experiences are no better than the CRT Televisions of 1960. Just like we have developed a lot since then with better hardware, AI will do the same with VR.

In this article, we will talk about how AI will revolutionize Virtual Reality. But before that, let’s understand what VR is.

Virtual Reality (VR) is a simulated experience that can be similar to or completely different from the real world. VR is achieved by using a computer to generate realistic images, sounds and other sensations that simulate a user’s physical presence in a virtual or imaginary environment.

A person using virtual reality equipment is able to look around the artificial world, move around in it, and interact with virtual features or items. The effect is commonly created by VR headsets, consisting of a head-mounted display with a small screen in front of the eyes, but can also be created through specially designed rooms with multiple large screens.

Now that we know what VR is, let’s see how AI changes the game.

AI is making the VR experience more realistic. The main aim of VR is to make the experience as realistic as possible. And with AI, we are getting closer to that goal. AI is already helping in creating realistic environments and characters. Just like in the real world, these characters can interact with you and react to your actions. A big advantage of using AI is that it can create and simulate an infinite number of possibilities. This means that you will never get bored of the VR experience as there will always be something new to do. As AI can also create realistic physics which makes the experience even more believable, it will make VR even more realistic in the future. Here are a few ways AI-powered VR experiences will challenge reality:

Yes, you read that right. In the future, AI will be able to create a realistic virtual version of you. This means that you will be able to meet yourself in a virtual world and interact with yourself. This can have many applications like helping you rehearse for an important presentation or interview. But yeah, it will be more than that, for sure.

AI will also be able to create realistic versions of other people. So whether you want to meet your friends in a virtual world or talk to a celebrity, AI will make it possible. These characters will be based on real people, and will be able to react and respond just like them!

AI will help create entirely new worlds which don’t exist in reality. So whether you want to visit a world made of candy or a world made of fire, AI will be able to take you there. Or maybe a world where gravity works opposite.

e. Anything else you can think of!

So whether you want to fly like a bird or swim like a fish, AI will make it possible. And as AI gets better and better, the sky is the limit for what it will be able to create! If you think AI can’t do it, you are utterly wrong. Have you ever heard about AI art generators, and how they can create art out of nothing? Exactly.

What about the immersion, though?

Well, let’s not overlook the VR part as it is the main factor in the process. You can not get immersed in the present-day boxes. The VR lenses must be comfortable, natural, lightweight, and with a large field of view. Also, the sound must be spatial and beyond three-dimensional.

And that’s not all! The user interface must be easy to use and natural. So that you don’t need to think about how to do something, you just do it. For example, if you want to pick up an object, you just reach out and grab it like you would in real life.

For that to become possible, we need haptic feedback. Haptic feedback is the sense of touch in VR. This means that when you interact with something in a virtual world, you should be able to feel it. Nowadays, we are only able to feel some vibrations, but in the future, haptic feedback will be much more realistic. You will be able to feel the texture of objects and even the temperature! Imagine being able to touch fire without getting burned or feeling the coldness of ice! That would take immersion to a whole new level!

And as if that wasn’t enough, AI can also help us with scent generators. So instead of just seeing and hearing things in a virtual world, you will also be able to smell them! This would make VR experiences even more realistic and immersive than they are now. And as AI gets better at creating these scents, they will become indistinguishable from reality itself! All in all, we could use a combination of non-invasive techniques to trick our brains to believe that the virtual world is real.

AI is going to change the game when it comes to Virtual Reality experiences. It is already making them more realistic by creating realistic environments and characters which can interact with you just like real people do. But that’s not all! In the future, AI will make VR even more realistic by making it possible for you to meet yourself virtually, visit any place in the world without leaving your home, talk with celebrities or anyone else you want, create entirely new worlds which don’t exist in reality, fly like a bird or swim like fish among many other things. And if that wasn’t enough, AI can also generate and simulate any worlds, circumstances, and events you can think of, in VR. 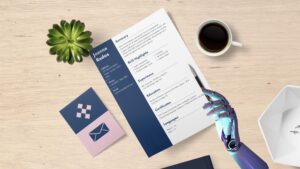 Previous post Use Resume-Building AI to Prepare One With No Skills?
Next post What is the best way to back up your data?