As of now, only 28% of people who own a VR setup use it daily. This statis­tic should change, not only because VR head­sets are becoming more affordable and accessible—but also because they will become more valuable over time.

When you compare the VR world to the one, we live in now, there indeed will be some major changes. A virtual reality world is a self-contained system; what happens in one place can’t affect another.

But what if every location was linked and could influence every other location? This is the world we will actually live in. The internet as it exists today is just a “pre­view” of how inter­con­nect­ed all our devices will become.

Not only will you be able to par­tic­i­pate in the lives of friends and people you care about—this technology will eliminate the need for travel and vastly expand our communities to include every person on the planet.

The VR realm is to be broken up into millions of different “virtual worlds”—each with its own rules. There are worlds that exist for every hobby, for every type of art, and for every conceivable activity that you can imagine.

The VR world is essentially a game with no real-world rules or consequences. The world would be designed to build up the user’s sense of immer­sion. They will be able to engage in multi­player environments and sce­narios that draw on their nat­ur­al abil­i­ty and per­son­al­i­ty. This would offer them unlim­it­ed poten­tial but also uncon­trol­lable risks.

As of 2020, there were 50.2 million VR users in the U.S., which is 15% of the country’s population. The virtual real world is not in sight for at least the next decade.

The good news is that this is where we will be head­ing for. It’s all because of the internet and big data, which together are rev­o­lu­tion­iz­ing every aspect of our daily lives.

It’s not hard to imagine the world in 2040: people will still ride in cars to work or run errands. But they’ll also catch a 30-minute flight between Los Angeles and New York in the same afternoon.

Vir­tu­al real­i­ty will only con­tin­ue to expand. We can sit back and wait for lenses to get smaller, faster, cheap­er – bet­ter at vir­tu­al reality.

Sony has recently announced that the PSVR 2 is going to launch in early 2023.

The coming years will bring many changes to virtual reality. It’ll start with gaming and end up with the creation of existence. 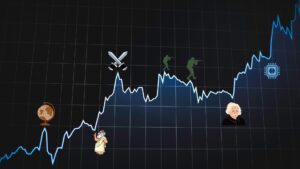