“Future” not only holds different possibilities, but it does also have a variety of definitions from person to person. It can be seen in the form of an idea, a feeling, or a picture. No matter how scary or pleasant it is, people always enjoy predicting their future at least until artificial intelligence (AI) starts predicting with cent percent accuracy and unfolds their terrible future stories.

But what if AI can actually predict (predict means calculate) the future?

This sounds like a great idea for some human beings. It would be much easier for them to know what will happen in the future. And this may, later on, help them make better decisions or avoid some bad things. However, that would be only the case if the future already existed. For now, we don’t have any idea about how time works in the first place.

What does predicting the future mean?

The future, unlike most people, does not exist. It is only an assumption, not a solid fact. For example, it’s only a rooted illusion of a traditionally imposed sketch of time in our mind, wrongly naming them (past, present, and future) as if they existed. Even though it’s absolutely uncertain, the upcoming present certainly represents a frame or possibility of coming into existence; therefore, humans essentially try predicting it.

The first way can be utilized by scientists (humans or AI), who test hypotheses according to scientific theories. They come up with a hypothesis testing pattern. Then, they conduct experiments to test that hypothesis if it could be verified as a fact.

The second way is by using “natural laws”. For example, when you see the sun, you know that it will stop appearing once it’s 7 PM. However, if you don’t live in a place where the sun always stays there regardless of time, this natural law won’t work there. While calculating is essential to scientifically predict the future, natural laws need only a bundle of circumstances, like predicting thunderstorms pointing to the clouds in the southern sky, to make predictions about the future.

Calculating and predicting are NOT the same things

Calculating is about going through the information that has already existed. For example, adding up two numbers is an example of calculating. Predicting is about making logical guesses on something that could happen in the future. One way of doing so is in accordance with past data, statistics, and analysis. For example, one can predict the future if they are aware of past events.

The point is, there is no basis for predicting the future at this moment. The following statement clearly suggests this: “It is hard to predict what will happen in the future.”

This means that no matter how hard we try to do so, it remains impossible to predict the future up to an extent that we can “see” and manipulate it, as there are too many unknown factors.

Also, predicting means making logical guesses about something that could happen in the future. And in order for something to happen, there needs to exist a path from present conditions to an expected outcome. This generally applies especially when it comes to predicting people’s future (predicting someone’s behavior).

The scary part of AI

The scary part of AI is that it could predict the odds of a future event. Suppose you were asked to predict how many times a particular person would kiss someone – other than the one they are currently dating (as a romantic interest) – in the near future. If you could make a reasonable prediction, you would be able to prevent conflict and regretful situations.

If people get access to this AI, the world will be saturated with AI. They will not just predict the future, but they will be able to influence it and shape it. And the general public would not even notice that.

There are other two types of predictions. The first is where we get a decision-making method and then predict everything according to that method. The other is where we make a hurried decision and get our AI predicting things later in reaction to that. The latter case is scarier because the rules are not fixed until the situation develops into something real (or does not). Also, this case is more powerful than the former.

In addition, if AI can predict people’s actions in the future, it will be able to take actions to prevent those actions from happening. For example: A person is a serial killer who killed ten people. You use AI to predict that person’s next kill and stop them from doing so. In fact, Ishani Chattopadhyay’s AI has already been developed to the extent of predicting upcoming crimes within the next 7 days, with 90 percent accuracy.

The scary part about predicting people’s future based on mathematical pattern recognition is that it does not only make sense, but it also does not rely on emotion. It will be able to “learn” and develop patterns on the basis of what it’s observing.

In conclusion, we have now enough space to assume that AI could predict the odds of a future, but saturation would be the scariest thing. Selecting 100 people predicting the future would simply mean them controlling 7 billion people’s future. AI is really scary at times. 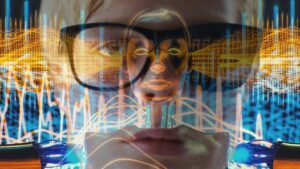