Mind simulation based on virtual reality is the next big thing for mankind. We can use VR for anything from a movie theater to a tool for physical rehabilitation. But there are more aspects of VR that go beyond entertainment. It can help people understand themselves and their world better. Not limited to just that, VR can simulate minds like never before, and change different realities entirely.

When exploring these ideas in greater depth, however, one quickly realizes just how complicated the topic of VR truly is.

Minds are powerful things. We use them to create entire worlds within our heads, to imagine the impossible. We use them to dream the dream that never was. These universes can be as vast as their creator’s desire; from the mundane, day-to-day life of a retail worker in London, England all the way up to exploring unexplored galaxies at speeds faster than light.

But what happens when these worlds cross over into reality? What if we could use VR to simulate minds or change our realities? This is where scientists and futurists collide: could VR, the tool of our ever-changing ambitions, become so versatile that it could change how we think about the very nature of reality itself?

Thus far, the answers remain inconclusive. There are some interesting things happening in this field of research. Researchers are investigating ways to make VR equipment act more like a biological brain when stimulated. The idea is that VR equipment might need a sort of “mental exercise” to function properly. Essentially, virtual reality needs to feel like life in order for it to be fully realized and to feel “real.”

The other part of this theory is that VR equipment functions much more like an animal simply by being exposed to the stimulus. Given proper “training” by its users, it can become infinitely more versatile and complex than it would be otherwise.

There are countless examples of VR already improving the lives of people all around the world. The most obvious one is rehabilitation, whether for physical or mental training.

A study was done in which many wheelchair-bound people sat in a virtual reality environment with an avatar that walked around and explored things just like a normal human being. In doing so, these wheelchair users were no longer limited to their chairs; they could walk freely and explore new environments from their own perspective instead of from the perspective of someone else.

Futuristic AI-powered virtual reality technology will unlock even more potential for freedom in a virtual world, especially for those who are physically challenged. AI will take care of the brain simulation part, and the hardware would be VR eye lenses.

In order to simulate worlds inside VR, artificial intelligence is certainly going to play an enormous role. With the help of machines, it will be possible for us to simulate limitless and incredibly complex worlds. Therefore, we might come to see more and more virtual worlds such as these in our reality. As VR becomes more and more popular, the dreams we set for it will only increase. 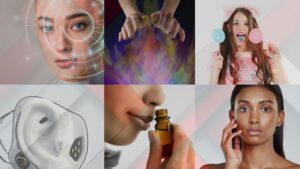 Next post Can you create “Artificial Senses” in the lab?