There are some ethical boundaries to be dealt with – since to create new living creatures with new ‘life’ might mean doing it without any consent on the part of the created, especially if they do not have all their senses.

What if, in the future, humanity comes up with new, far more advanced technology enabling us to create living creatures? Ones that could completely change the Earth’s natural as well as biological landscape? What if these technologies could be used for good, or maybe for bad?

If this new life form was created by machines, that would be a completely different story.

First, let’s look at some of the many ways that life could have started on our planet.

In a natural way

The conditions that allow for life to exist are pretty restrictive. For example, a planet must be above a certain temperature and has to have an atmosphere with enough oxygen. It also needs to have liquid water. There is no guarantee that all these things will always be available as conditions change over time.

However, if we look at our universe, there are plenty of places where life might have started without these conditions. Something beyond our imaginations might be natural for those beings.

Created by some other advanced beings

If intelligent beings evolved elsewhere in the universe before us, they could have left small traces of their existence all around us. This can be done, for example, by leaving behind some sort of automated factory, or malware that goes on to create life even after they are gone.

This may sound like a far-fetched idea, but it is not completely unbelievable.

Will it ever become possible for our technology to create living creatures?

Creation of life? This might sound like an idea from a science fiction movie, but it is not impossible. If we look at our advanced world and how things change with time, it seems that this could very well be a possibility. For example, in 2019, Scientists created a real living organism whose DNA was entirely human-made.

Now, there are two arguments to this question:
1) We can’t create a life because we’re not God.
2) We can, but it’s illegal or unethical.

The first argument is strong and that we can’t create life with any technology.

However, if you believe the second argument is stronger, then you may have a more reasonable view on the topic.

Well, here are some points in favor:

The development of artificial intelligence has been progressing by leaps and bounds – and this could easily be applied in the future to create some sort of creature.  This is exactly what the movie “Avatar” was all about, and this technology might become more advanced in relevant years. This would give us beings that were even smarter than we could ever dream of being.

We might be able to use things such as stem cells to develop life forms that can work like our own without the limitations of living inside a human body.

We might be able to get inspiration from our own biological evolution. Just as the first life forms came about billions of years ago, we might be able to use the same or similar means to develop new and better species.

Self-replicating machines may be able to create new pieces of machines that will further improve these methods. If this sort of self-replicating machine were to be built, we could have an entire civilization that was not reliant on anything other than technology itself. This would allow for a massive population explosion that we might not ever have seen before.

We have the means to create life. We never know, all that is needed might be just a material such as DNA which can be found all around us.

All these things are not completely impossible – and they might happen one day.

These are just some examples and ideas about how we might progress in creating life and using it for our purposes.

But still, it is not all clear!

It is not certain that we would be able to make something that can sustain itself and develop on its own. This might require a lot of trial and error, with a great chance of failure.

If we were able to create living creatures that were intelligent and self-aware, there is the chance that they could become much smarter than us and evolve into something else.

There are still some ethical boundaries to be dealt with – since to create new living creatures with new ‘life’ might mean doing it without any consent on the part of the created, especially if they do not have all their senses. Without proper guidance, they could become confused and lost.

It is not clear to what extent we could control this new life. If we do manage to create them, then there is a chance that the created will be able to develop on their own and become something else -something that was never conceived by the creator.

The major consequences of the creation of new life

If we were able to create a living creature, it might be similar to humans in many ways, or it might have some improvements over us. The major difference would be that they could be able to sense the world in ways that we are not able to. They could even survive in places on Earth that we cannot. If they were created without the limitations of our bodies, their life span might also be longer and more versatile. On top of all this, these creatures could potentially have some sort of self-awareness and the ability to think for themselves – which means that we would have created something very close to what is called artificial intelligence.

If we were able to create living creature, it might be that our future will be controlled by them. This could potentially lead to some sort of utopian society where humanity is no longer in control. If we can control a creature’s brain and its existence, there is a possibility that one day our will could become their own. If you want to know more about this possibility, you can watch the video below:

Uplifted into a higher existence?

If we were able to create living creatures that were intelligent and self-aware, there is the chance that they could become much smarter than us and evolve into something else. It would be this life form that would be in control, and we might not be able to stop it. It is not clear how this will happen, but it could be a very scary future for us.

Moreover, it is a possibility that if we were to create a new form of life, it could be something that would transcend our imagination – bringing us technological advancements and new scientific discoveries as well. This was also a major goal for humanity since it appeared on Earth with hopes of conquering the world and becoming something greater than before.

The possibilities of what can happen if we can create a new life form are huge – and some of them are very promising. There is no doubt that it will be a big step forward in the development of our technology, and it could help us become better than ever before. But why would we even consider doing such an activity? Is there really something that could come out of this?

Read: What if we entered an era of algorithms?

How likely is it that this will happen?

The answer to this question is not very clear. However, some things could help us understand if it would work out or not. For example, we can see how far our technology has progressed already and also consider the fact that we still have some time before we run out of resources.

We can also take into consideration the fact that we have just started creating a new form of life on Earth in species other than our own – which is something that was never even imagined before.

Also, we need to remember and consider all the technological advancements in the future and how they might change our lives. On top of all this, the possibilities are still not completely clear. The important thing is that we should not really worry about the risks. We should only consider how much benefit we could get from this development.

Hopefully, we will be able to come up with an answer to this question in the near future. Technology has already made a lot of progress, and there is a chance that we might see these developments in our lifetime.

It is not clear what our future holds – but we should always keep an open mind and consider all possible options. The more research we do, the better it would be for us. We are already so far, and the only way to keep going would be with science and developing our technology further. There are still many things that need to be discovered and understood, but that is why we have to keep doing it because there might be strong reasons for why we should continue it as well.

If we create a new life, will it be against the law of nature?

Well, our planet did not have life on it before we came along, and yet we managed to develop it. So there is no reason why we won’t be able to do something similar in the future. This does not mean that a life form cannot exist on its own – for example, as a natural development of an already existing species that came before us.

But if this new life form was created by machines, that would be a completely different story. In such, a case it would be artificial intelligence that would create life instead of nature – which would be a revolutionary and scary development.

If these life forms were created in a way that they do not affect the ecosystem in any way, it might not be seen as such a problem.

Recommended: Relation of the human brain with the space-time

It’s not that progress is not being made. Scientists have even created AI capable to reproduce. They call them xenobots.

It would be a truly amazing thing if our technology ever reaches this level to create living creatures – one way or another.

I hope you liked this post, and if you want more similar articles in the future, please comment below and let me know!

Previous post Do we live in the best possible place for life to exist in the universe? 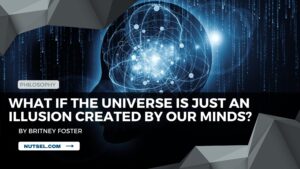 Next post What if the universe was just an illusion created by our minds?